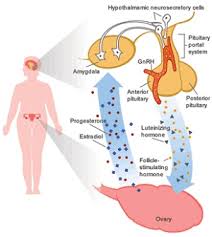 For hormones to work efficiently, they depend on the activity of special cells that are able to respond to their signals. These cells are known as receptors. What happens is that many different organs and tissues of the body have specific types of receptors for specific hormones. Therefore, a particular hormone is able to affect an organ that has receptors that match it.

Therefore, when hormones are produced, they are able to travel throughout the body via the normal body circulatory systems. However, they only affect specific organs in the body, those that have the right receptors. Further, the activity of hormones in the body may be regulated by other hormones. This usually happens in the form of the presence of one hormone either signaling the production or inhibition of another.

What are Neurotransmitters? How do they relate to Sex Hormones Depression?

Hormones have been known to act in a manner similar to that of neurotransmitters, thus affecting the mood of individuals. Although there are many different types of hormones, those ones that are related to sex have received a lot of attention in the role that they play in influencing moods, particularly when acting as neurotransmitters. There are different types of sex hormones which include the following: testosterone, estrogen, dopamine and progesterone. Of all these, testosterone and estrogen are the ones that have received a lot of attention with regard to the role that, when acting as neurotransmitters, they play in causing anxiety and depression in individuals. So when Sex Hormones Depression occurs by restoring sex hormones imbalances we may alleviate the symptoms of depression.

There are several ways in which different types of sex hormones can be used to help patients with anxiety and depression. We shall look at the most important ones briefly.

First, when the level of testosterone in an individual falls, symptoms such as low energy, lack of vitality and low libido appear. Interestingly, the reverse of this process is also true. When a patient receives a testosterone therapy, there is a sudden increase in energy, vitality and libido. Importantly, depression and anxiety are characterized by low libido and lack of energy. Although these observations are influenced by so many other factors, it can be concluded that testosterone has a role to play in helping male patients who are showing signs of depression and anxiety.

The possible use of estrogen in helping women overcome depression and anxiety can best be understood when one considers the normal cycles in women that characterize its production. Basically, changes in estrogen levels take place in three major phases: before menstruation, during the postpartum period and after the menopause period. In all these phases, hormonal changes in the body of a woman cause erratic changes in the mood. It is common for many women to experience depressive symptoms during all these stages. The severity, and extent of the occurrence, however varies a great deal. Since the mood changes that occur during these periods are usually as a result of hormonal changes, with estrogen being the biggest contributor, it then follows that estrogen and other sex hormones are directly linked to depression. Therefore, they can be used to ease depression symptoms in women.

For women who are past their menopause and are experiencing depression, estrogen has been successfully used to overcome the symptoms of depression. Although there are many other factors that may influence the process, the consensus is that hormone therapy has proven to be an effective method of treating depression in different kinds of patients.

Here at AWAREmed Health and Wellness Resource Center, we keep abreast of all recent developments in the use of hormone therapy to treat depression and anxiety in men and women. Our approach remains highly professional and tailored to your individual needs. Regardless of your specific health need, feel free to contact Dr. Dalal Akoury for a consultation session. You may as well visit us in Myrtle Beach, South Carolina to experience our range of healthcare services.