Targeted cancer therapies are drugs designed to interfere with specific molecules necessary for tumor growth and metastasis. Conventional chemotherapy is a treatment that targets cell division. It kills rapidly dividing cells hence affecting their spread. However as known conventional chemotherapy has side effects as healthy cells are also affected. The aim of target therapies is to fight cancer more strategically with few side effects.

The target therapies are always pre tested before they are used on a patient. This is mostly done on animals like mice. However in some cases it may be tested on humans. The target therapies are mostly used with other treatment methods such as chemotherapy. They help in killing the culprits behind the uncontrolled cancer cell growth and metastasis making such treatments more effective.

Typically the body cells grow and divide to give rise to new cells that will replace them when they grow old and die. However this circle maybe broken and that is where all problems begin, new cells may come up earlier before the body requires them while the old cells may refuse to die and leave space for new cells. The many cells may initiate a growth which divides without control. Eventually these cancerous cells will break away from the parent tumor and spread to the rest of the body causing damage to healthy tissues.

The growth and division of cancer cells is not controlled. The growth of healthy body cells is controlled by the certain enzymes, chemicals and molecular signals that issue instructions to the cells to divide when they ought to. Genes are also involved in cell growth. Hormone proto-oncogenesis is involved in cell growth and division. Changes in these genes may result in formation of cancer cells. The change otherwise known as oncogenesis promotes excessive cell growth and division. To help save this situation, tumor suppressor genes need to stop the cell from dividing rapidly but in case they don’t work as needed the tumor growth begins.

Therefore changes in the genes may play a very important role in the formation and growth of tumors. By use of target therapy, the excessive growth of cells can be inhibited and hence put a control to the rise of cancer cells.

How can target cancer therapies help in cancer treatment?

Target cancer therapies are useful in cancer treatments as they work in a number of ways to inhibit the growth and division of cancerous cells at various stages in cancer cell development, growth and metastasis. These therapies interfere with the signals that are sent to the cancer cells to divide. These signals are sent by the abnormal proteins. The target therapies may do away with these proteins completely blocking the signals that trigger excessive cell division and spread of the cancer cells.

By interfering with the signals that promote growth and division of the cancer cells, the target therapies help in controlling cancer. These therapies are always pre tested for effectiveness and so they are precise in executing their intended duties.

Target cancer therapies provide doctors with a better means to personalize cancer treatments. With unique molecular targets produced the treatment of a cancer patient can be individualized hence avoiding the standard treatment where cancer patients are given the same drugs that may not work well in treating the patient. Another advantage of target cancer therapies is that they are more selective hence few healthy cells are affected. It also has few side effects as well as enhances the effectiveness to cancer treatment. It is also convenient to the patients as it may save the patient from repeat chemotherapies that is always the case with haphazard cancer treatment.

Small molecule inhibitors typically interrupt cellular processes by interfering with the intracellular signaling of tyrosine kinases which are enzymes that transfer phosphate groups from adenosine triphosphate to tyrosine amino acid residues in proteins. Tyrosine kinase signaling initiates a molecular surge that can lead to cell growth, proliferation, migration, and angiogenesis in normal and malignant tissues. EGFR, HER2/neu, and VEGF receptors are tyrosine kinases. 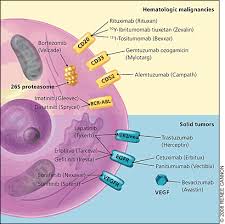 Monoclonal antibodies  can help in fighting cancer through many ways. Monoclonal antibodies may trigger the natural body killer cells to fight the cancer cells. They help in interrupting the cancer cell growth process by binding ligands and receptors. They may also use toxins or radioisotope to harm the cancer cells. Monoclonal has a denatured protein structure and are administered intravenously, they are subject to drug interactions as they do not undergo hepatic metabolism. Their ability to interact favorably with drugs allows them to be used alongside other treatment methods.

To be cancer free you need updates on cancer to know more about cancer. Dr. Dalal Akoury runs a website that equips people with relevant information about cancer. Check on her website regularly to benefit from her wealth of health knowledge