The Biomat is safer than heating pads because there are no harmful electro-magnetic waves. Studies have shown that the use of common electric heating pads may cause carcinogenic cellular activity. The Biomat uses remote computer frequencies that generate far infrared light-waves and negative ions. Heat is created through these natural, beneficial light-waves from vibratory signals, and conducted into the amethyst crystal bed via its high-tech messaging system. This advanced technology works without electric coils, and functions through a state-of-the-art Electromagnetic Wave Interceptor. The Biomat energetics penetrate 80 times more deeply than electric heat.

Unlike an electric blanket, the surface of the pad does not get hot when its turned on. However, once you lie down on it, it begins to warm the inside of your body and the part of the pad making contact with your skin gets warm. When any part of the pad gets higher than the selected temperature, the sheet current is cut off by thermal sensors distributed throughout the pad. It comes with an external control box where the AC is converted to DC and you can adjust the desired temperature of the pad.

What Are The Health Benefits Of Far Infrared Rays?

Far Infrared Rays relieve pain and stress by expanding blood vessels and increasing circulation. Better circulation allows more oxygen to reach injured areas of the body, helps reduce pain, and speed up the healing process. The (FIR) light not only benefit the muscles on the surface of the body, but also at a cellular level, including the blood vessels, lymph glands, and nerves in the deepest parts of the body. These rays vitalize the biological function of our cells and relieve neuralgia, backache, and arthritis pain, as well as help eliminate toxins and carbon dioxide from our blood. In addition, far infrared wave treatments have been used for cancer, chronic pain, stress, numbness, joint pain, rheumatism, low blood pressure, diabetes, and asthma. The Far Infrared wave speeds up cellular metabolic processes, stimulating the activity of mitochondria, and triggering enzyme activity as well as the healing regeneration and normalization of damaged cell tissue. Also, far infrared light waves are essential for bone growth as well as preventing osteoporosis.

Dr. George Brainard found that light affects the hormonal balance of the body, in the levels of melatonin, prolactin, cortisone, testosterone, and thyroid hormones, and that light is essential to the functioning of our entire endocrine system. Far Infrared Rays promote vasodilation, bringing nutrients and oxygen to soft tissue regions, stimulating the removal of toxins, and decreasing inflammation and edema from the soft tissue.

You can safely get a full cardio workout and burn up to 600 calories in 30 minutes with the Biomat. It is perfect for those who are disabled or not well enough to get the daily exercise needed to stay healthy. Perspiring is part of the complex thermoregulatory process of the body that increases the heart rate, cardio output, and metabolic rate. The process requires a large amount of energy and reduces excess moisture, salt, and subcutaneous fat. Fat becomes water soluble at 110 degrees Fahrenheit, and the body sweats out fats and toxins

The Biomat is further enhanced with amethyst crystals, known for their calming and healing effects since ancient times. Amethyst crystal has come to be known as a power crystal with prolific healing powers that can be characterized as purifying, pacifying, and transitional. Known for its power to detoxify the body from alcohol and other harmful elements, amethyst also naturally produces far infrared rays. These rays revitalize the biological function of our cells to relieve neuralgia, backaches, and arthritis. Amethyst has been deemed as “nature’s tranquilizer” by many health practitioners because of its effectiveness in relaxing not only the mind, but also the nervous system.

The Amethyst Effect was scientifically demonstrated through spectral analysis, which demonstrated a change in infrared light when refracted through amethyst crystals. Scientists experimented with passing far infrared rays through a variety of substances, including various gems, glasses, and plastics. Amethyst was found to be the only substance which clearly changed the spectrum of infrared light. Wave forms mimicked patterns similar to the human voice, according to scientists. While no theory has been proposed regarding the Amethyst Effect, scientists hypothesize that the infrared light passed through the amethyst releases over 20 million years of information which is made available to the human body for healing purposes.

The field of Far Infrared Crystallography explains this effect in further detail. Far Infrared Rays refracted through amethyst crystals organize the light into geometrical patterns with higher bio-compatibility. Korean researchers propose that the addition of amethyst in the Biomat allows for greater increase in the utilization of the beneficial far infrared light by the human organism. 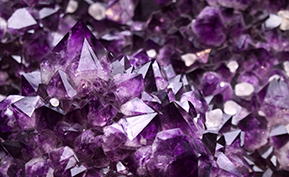 What Are Negative Ions And Where Do They Come From?

Ions are electrically charged atoms or group of atoms formed by the loss or gain of one or more electrons. Negative ions (anions) are created by the gain of an electron and positive ions (cations) are created by the loss of an electron. They are created in nature as air molecules break apart due to sunlight, radiation, and moving air and water. You may have experienced the power of negative ions when you last set foot on the beach, or walked through a waterfall. While part of the euphoria is simply being around these majestic settings, the air circulating in the mountains and the ocean is said to contain tens of thousands of negative ions. At Yosemite Falls, you’ll experience over 100,000 negative ions per cubic centimeter. On the other hand, if you are on the freeway or in your office, you will experience under 100 negative ions or maybe even none.

How Are Negative Ions Created In The Biomat?

The Biomat features the Kurera Super Fiber from Japan. When the Kurera Super Fibers interact with DC energy, the potential field surrounding the material is converted into a negatively charged field. When 1000 volts of electricity are slowed down and converted into DC energy, the Kurera Super Fiber generates a discharge of Negative Ions into the air and converts positive ions into negative ions inside the body. When 600-1000 volts of negative potential is applied to your body, more calcium and sodium minerals are circulating in the blood stream. This process changes an acidified body to an alkaline body. Although it uses a high voltage, there in no danger because there is no current flowing. This device is sometimes called a static electric treatment or high potential device. 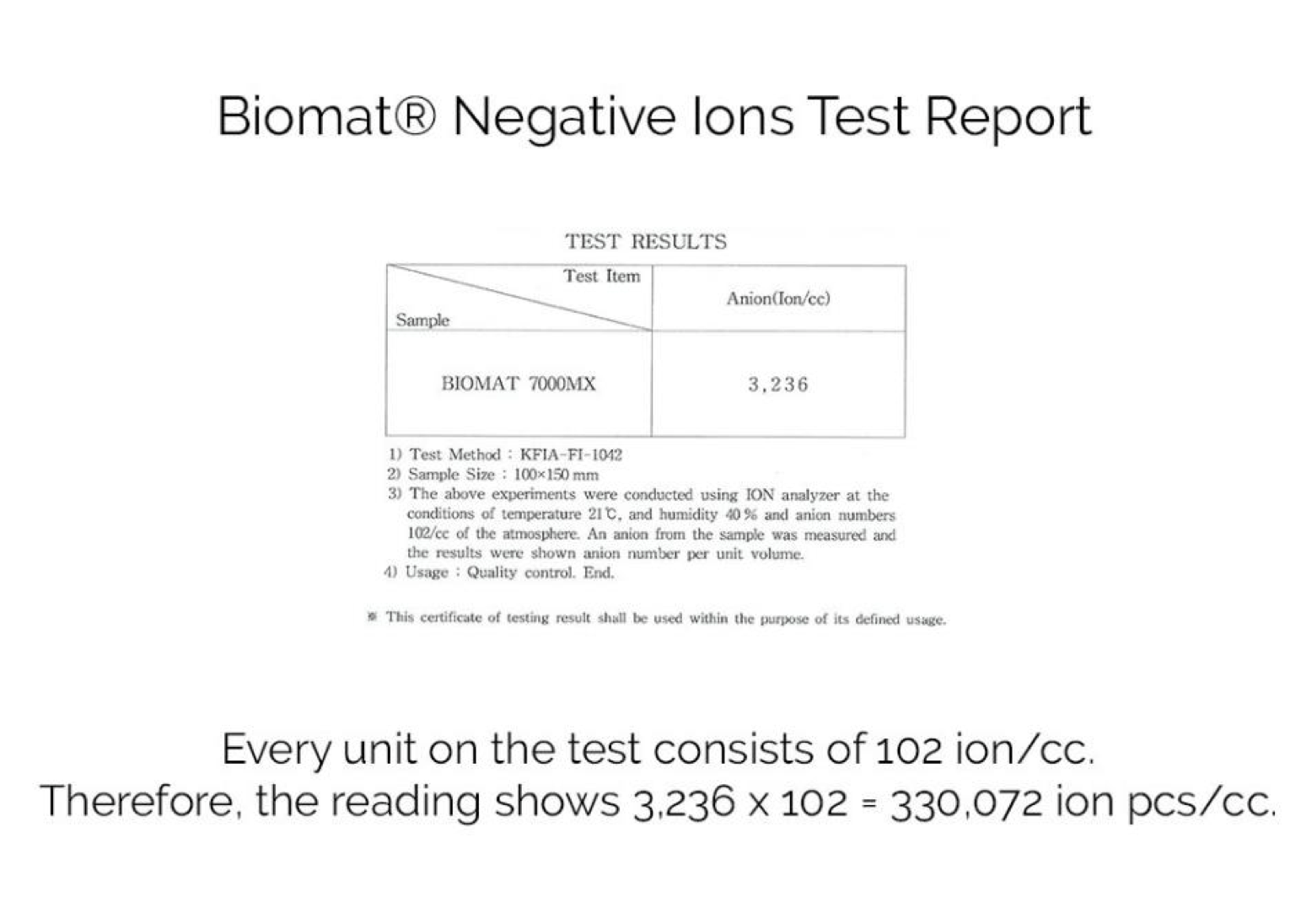 Why Are They Called Negative Ions?

Negative ions have a positive effect on people. Positive ions have a negative effect on people. An atom that has one of its normal orbiting electrons removed is called a positive ion. An atom with an extra electron added is called a negative ion. So you see, its kind of backwards – the terms “negative” and “positive” are actually reversed. Its a misnomer that we can thank Benjamin Franklin for. Back in his time, electrons (with a “negative” charge) and atoms were not understood correctly. So we’re stuck in the 18th century terminology, and that is why they are called “negative ions.”

How Do The Negative Ions Affect The Cells?

The human body consists of billions of cells, and each is enclosed by a cell membrane. This cell membrane performs many important roles, and some of these are absorbing nutrients, vitamins, hydration, and minerals. The cell membrane is also responsible for eliminating acidic waste material and toxins. When the amount of ions in the blood is increased, the function of the cell is activated. When there are more positive ions, the cell membranes close and the cell’s ability to absorb nutrition and eliminate toxins is disabled. Through research done by Dr. Tim Tanaka in Japan, it was discovered that when ionization is introduced, the ions in calcium and natrium (salt) in the blood increases, and the blood is purified. The blood then becomes more alkaline. Why is that important? Well for one, cancer cannot live in an alkaline environment.

The Biomat is an FDA licensed medical device that combines state of the art Far Infrared light and Negative Ion technology with the healing power of Amethyst crystal.

The Biomat is a revolutionary healing tool, ideal for health care professionals or anyone interested in improving their overall health and wellbeing.

The Biomat is approved by the FDA as an over the counter medical device.

Many Have Experienced Numerous Benefits From Far Infrared And Negative Ion Technology, Including:

Many insurance companies consider the use of the Biomat as a viable treatment option for pain as well as other musculoskeletal problems.

The Biomat delivers the benefits of a Far Infrared sauna for a fraction of the price. This unique device delivers the positive benefits of Far Infrared as well as generating 6.8 microns of Medium “Human” Infrared. According to NASA research, Human Infrared normalizes a variety of important physiological functions, especially glandular functions. This human infrared feature of the Bio mat makes it different from any other infrared device on the market.

Manage your health from the comfort of home